The following article appeared in the Hill Rag on 12/10/16.  The author, Sig Cohen, has been mediating disputes for more than 15 years both for the DC Superior Court and in private practice. He specializes in elder and family cases. Previously he served in the Foreign Service and in community-based nonprofit agencies. He can be contacted at chmediate@aol.com. For more information about his work, visit www.toughconversations.net. 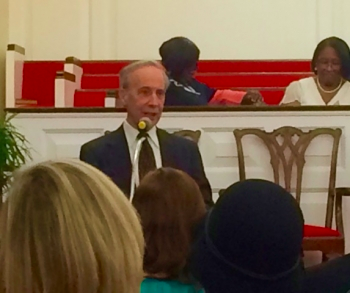 At a time when the political scene appears polarized over healthcare, gun safety, women’s reproductive rights, and climate change, among other issues, our Capitol Hill community seems like an oasis, where on the surface, at least, calm prevails.

Not always. Living here, I have witnessed minor differences escalate into toxic disputes. What’s sad is that conflict among neighbors often goes unabated. Rather than seek consensus, neighbors often resort to up or down voting on issues which produces winners and losers, and which can prolong enmity and fracture friendships.

In the last two months I’ve witnessed toxic rhetoric over two disputes: one involving changes to traffic flow on Maryland Avenue NE, and a quarrel among neighbors over whether a street in Northeast should become an historic district. I know little about the genesis of these disputes and have no opinion on either. But I keep wondering whether they might have been avoided. Could an open and inclusive discussion allow everyone involved to air their differences? Or, now that a dispute has emerged, could there be some resolution, full or partial, through mediation?

Capitol Hill, with all its history, attractions, amenities, and community activities, lacks one asset for creating and sustaining a peaceable community: namely a free community dispute-resolution service. Such a service would (1) mediate disputes between or among neighbors to arrive at a mutually acceptable settlement and a road map to fulfilling its terms and (2) facilitate discussion among all involved to prevent differences from escalating into a full-blown conflict.

In mediation, an impartial third party conducts a dialogue in which parties speak candidly and listen respectfully to what others say, and where interests and concerns are aired in an atmosphere of restraint and comity. Mediators do not offer legal advice or opinions. It is up to the parties to get their own legal counsel. Parties to a dispute, not the mediator, are the decision makers. Mediation is neither therapy nor counseling.

Mediation is future-focused. It cannot change what’s happened, but it can lead to a more peaceful and cooperative future. Mediators are not magicians. Some disputes are so intractable that agreement may be impossible.

Mediation is confidential. The only record is the settlement agreement, if parties agree that it should be public.

Both sides have to take part in the process for mediation to go forward. The project would not accept cases for which the DC Superior Court already offers free mediation: divorce and custody, landlord/tenant, small claims, probate, and civil cases.

If the project gains traction, it might become a model for neighborhood mediation programs elsewhere in DC and, in time, address an ever-broader array of community issues.

Finally, I invite persons who are trained and experienced mediators or have a background in other fields, such as intake or web design, to contact me at chmediate@aol.com.

Sig Cohen has been mediating disputes for more than 15 years both for the DC Superior Court and in private practice. He specializes in elder and family cases. Previously he served in the Foreign Service and in community-based nonprofit agencies. He can be contacted at chmediate@aol.com. For more information about his work, visit www.toughconversations.net.